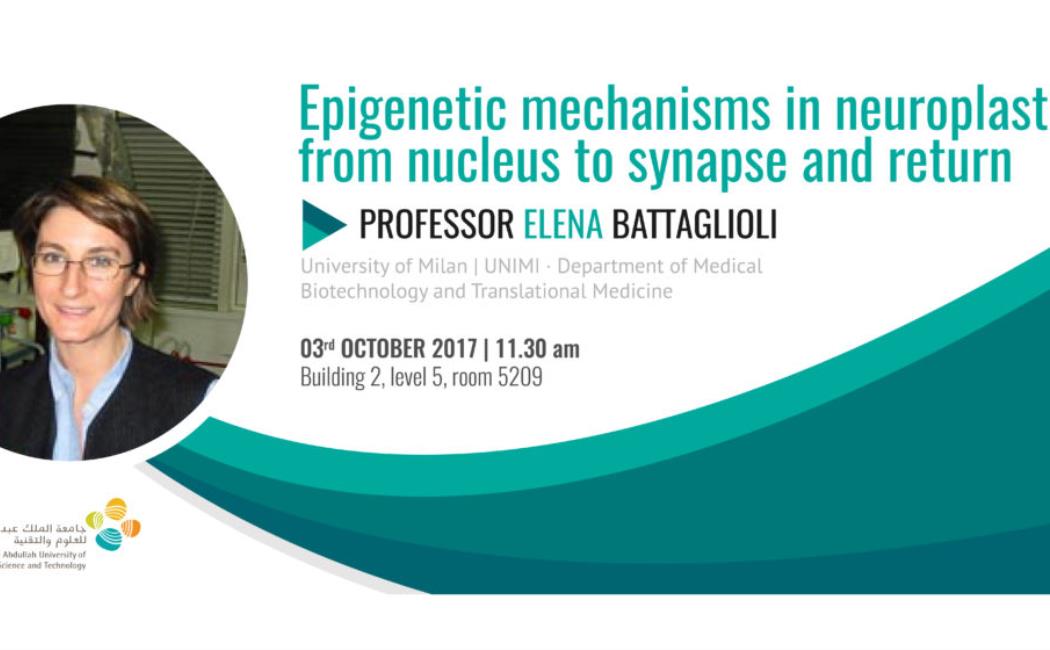 Epi/genetic mechanisms in neuroplasticity: from nucleus to synapse and return

The acquisition and maintenance of the specific neuronal functions underlying learning, memory and cognition require the induction of plasticity-related transcriptional programs in an activity-dependent fashion. The epigenetic enzyme lysine-specific demethylase-1 (LSD1) and its neurospecific splicing variant neuroLSD1 are key nuclear players in this process. In particular, LSD1 plays a dual role in information processing, being this epigenetic enzyme instrumental to transduce environmental stimuli under the form of inherent neuronal plasticity, but also representing a target whose function is directly modulated by these same challenges.
I will discuss how synaptic stimulation of hippocampal neurons is able to recapitulate the modulation of LSD1 demethylase activity is response to environmental stimuli such as psycosocial stress, and the possible role of such regulation in cognition-related forms of long term plasticities. Remarkably, LSD1 gene has been listed in the top 2% of evolutionarily constrained genes, a small subset of genes that being intolerant to functional variation, have been proposed to play critical role in disease. I will present data showing how in humans the epigenetic activity of LSD1 as H3K4 demethylase is instrumental in cognition-related processes thanks to the recent discovery of de novo variants mapped on the gene encoding LSD1 in three patients affected by a novel genetic disorder that features intellectual disability.

Biosketch: Dr. Elena Battaglioli received her BS degree in Biology (1993) and PhD in Molecular and Cellular Biology (1997) from University of Milan. She worked as postdoctoral fellow at the Howard Hughes Medical Institute, SUNY at Stony Brook, US in Neuroscience (1998-2001) and as Research Scientist at The Research Foundation, SUNY at Stony Brook, US in Neuroscience (2001-2002). She started her independent career in Italy at University of Milan in 2004 as Assistant Professor and in 2014 she became Associate Professor in Applied Biology. She is Principal Investigator at the BIOMETRA Department University of Milan, where she directs the laboratory of Neuroepigenetics; she is member of the Center of Excellence on Neurodegenerative Diseases (CEND) and member of the CNR-Institute of Neuroscience. Elena Battaglioli participated in the seminal discovery of the first identified flavin-dependent histone demethylase (Lysine specific demethylase 1) and associated co-repressor complex REST/Nrfs complex. Her research interests cover the field of epigenetic regulation of mammalian brain adaptation to stress and aging as well as the transcriptional regulation of splicing in neuronal tissue during development.